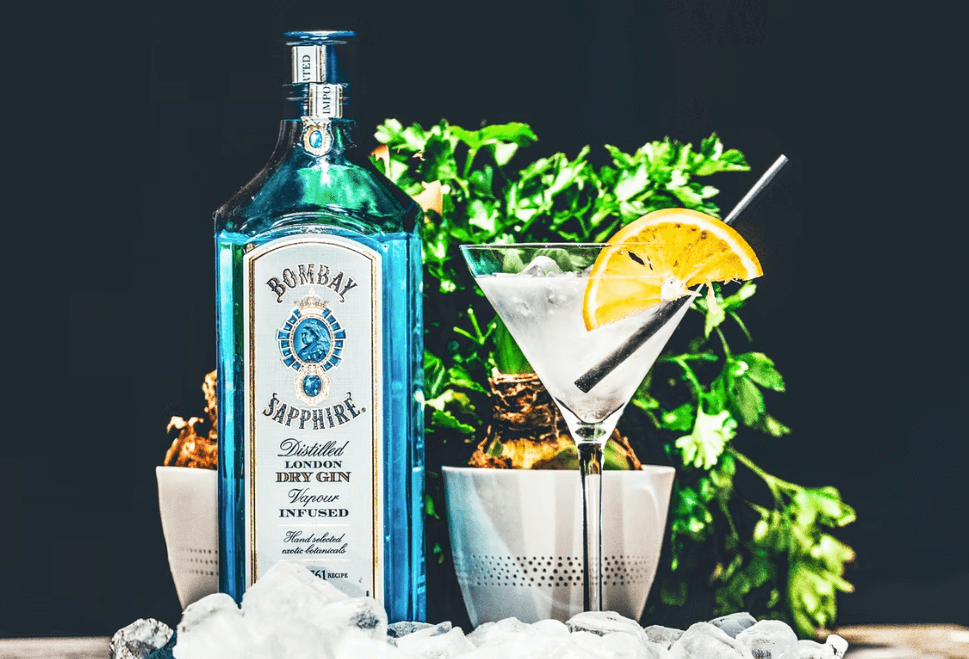 Once again, England becomes the backdrop of the history behind another notorious brand of gin. Bombay Sapphire’s blue-tinted renown started out in the streets of Warrington in north-west England. Since its inception in the 1760’s, the brand has since dominated the global market. Even during the height of the pandemic in 2020, Bombay Sapphire sold 4.3 million 9 liter cases worldwide! The influence of the brand and the premium flavours in their gin are unmistakable. In order to appreciate all that they have achieved today, it’s useful to understand where they started all those decades ago. Here’s a look at the early days of the iconic sapphire gin.

Much like students use gap years to figure out what their next step is, 24-year old Thomas Dakin made use of a gap year of his own.

In 1760, Dakin established his distillery in Bridge Street in Warrington, England. However, the elements weren’t in his favour that year, and he was forced to stall distillation until the following year.

Between 1760 and 1761, Dakin experimented and perfected his gin recipe, detailing ingredients as well as distillation methods.

Dakin’s gin distilling endavour began right at the dawn of the Industrial Revolution in England, enabling him to use the latest technological advances of the time. New gear allowed Dakin’s distillery to create a higher quality gin than those of distillers that came before him. His gin became known as Thomas Dakin Gin.

Thomas Dakin passed away in the 1790’s, after which his son Edward Dakin took over the company and distillery. The original recipe was passed down to Edward, and later on to his son William.

However, after William Dakin’s demise, the company was taken over by Edward Greenall, whose family are brewers in Lancashire. The gin brand was renamed as G&J Greenall’s Warrington’s Gin.

You may be thinking, “G&J Greenall’s Warrington’s Gin” is a mouthful! How did it end up being named the Bombay Sapphire? The gin wasn’t distilled in Bombay, nor did it contain any sort of sapphire colouring.

The evolution into the Bombay Sapphire began with New York-based lawyer Allan Subin. As G&J Greenall’s continued to rise in popularity in England, Subin saw an opportunity for gin to break into the American market.

In 1957, Allan Subin began working with Greenall to bring a version of their gin to America. His one request was that they used the original Thomas Dakin recipe, which used grain ingredients instead of molasses.

For the third time, this gin product received a new name—Bombay Dry Gin. Subin dubbed it so solely because he was inspired by the opulence of Bombay in the 1920’s under the rule of the Raj. The bottles hit stores in the US in 1960.

Bombay Dry Gin was an instant hit, selling 100,000 cases by 1970. For 20 years after its debut, demand kept rising. But even then, the brand still saw an opportunity for upgrade.

In 1980, Bombay Dry Gin was bought by the company IDV, known today as Diageo. At the time, IDV still wanted to entrust Greenall’s for distillation. However, they wanted to create a more high end product.

Enter Michel Roux, the man behind Absolut Vodka which had just entered the market a few years prior. IDV wanted Michel to do for Bombay what he did for Absolut—turning them into a luxury premium gin brand.

Greenall’s head distiller Ian Hamilton was tasked with elevating the flavours of the gin, while still maintaining Dakin’s original 1761 recipe. After many attempts, Hamilton settled on doing so by adding new botanicals. He incorporated two peppers: cubeb berries and Grains of Paradise.

Along with the enhanced flavours, branding had to follow suit. IDV renamed the drink Bombay Sapphire. Keeping with the Bombay theme, the company named the gin after the gem Star of Bombay, which is a gorgeous sapphire hailing from Sri Lanka. This 182-carat gem was gifted to silent movie star Mary Pickford by her husband Douglas Fairbanks.

In addition to the name, they decided that the sapphire’s blue tint would be represented in the packaging. The blue-tinted translucent bottles were created.

The launch of Bombay Sapphire in 1987 propelled the drink straight into the premium, top shelf gin category thanks to its expensive design.

Today, Bombay Sapphire is under the ownership of Bacardi, although distillation is still headed by G&J Greenall.

Production has now moved from Warrington to a new distillery at Laverstoke Mill, which is also open for visitations.

The brand has since added to its product line. They now offer flavoured gins, limited edition gins, as well as RTD gin and tonics.

The original Bombay Sapphire gin, containing 10 carefully selected botanicals from around the world.

Named after the original Star of Bombay gem. Contains two botanicals in addition to the original 10: dried bergamot orange peel from Calabria, and ambrette seeds from Ecuador.

Star of Bombay is available at Red & While.

Highlights eight botanicals originating from locations around the world, spanning from Indo-China to Saxony, featuring a heavy juniper flavour.

A limited edition gin inspired by the feeling of being in the English countryside. Infused with toasted hazelnuts, mint, and rosehip.

Taking inspiration from the colours of the sunset, infused with bittersweet mandarins from Spain, white cardamom, and gold turmeric.