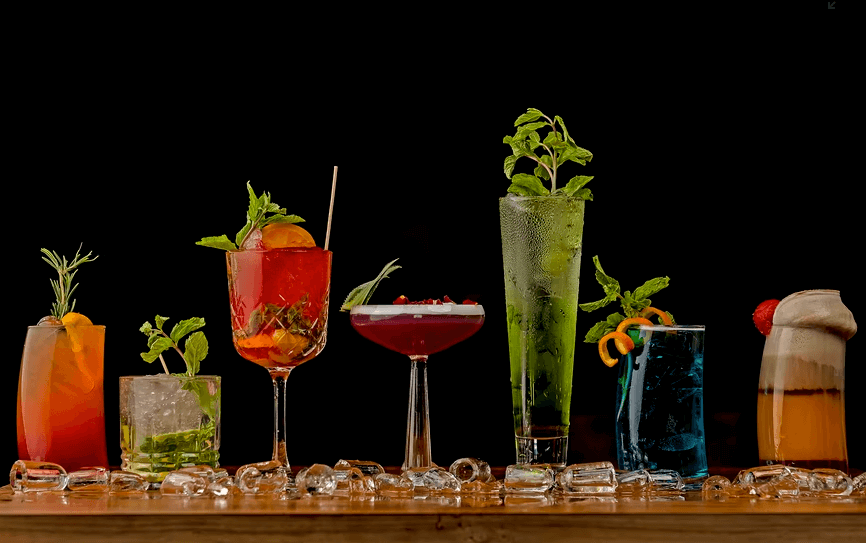 We’ve learned how a wine glass’s design can impact the way the wine tastes, and by extension the taster’s drinking experience. Well, wine isn’t the only alcohol that is affected by the glass it’s served in. Glassware has an important role in the enjoyment of liquors as well, particularly cocktails. You may have noticed that cocktail glasses at the bar also vary in shape and size. The vessel you use for a martini wouldn’t be the same as one you use to drink a whisky on the rocks. This isn’t just for aesthetic purposes. There’s a whole science as to why different cocktails go in different glasses. There are many types of glassware available, and knowing how to use them can be the key to serving a delicious drink.

Perhaps the most popular and recognisable cocktail glass is the martini glass. It has a triangular bowl, long thin stem, and a base. It serves as chalice for drinks such as the martini, Manhattan, or cosmopolitan.

The martini glass can hold about 8oz of liquid. Its bowl has a wide opening of 17.5cm. Originally created with gin in mind, the wide brim is meant to expose the liquor to as much oxygen as possible. This allows it to aerate so that more flavours shine through.

Not only that, the brim is also just the right size for a toothpick to rest on. Because what is a martini without the olive on a toothpick garnish?

This may just seem like a normal drinking glass to you, but its slenderness has a specific purpose to it.

The highball glass is used to serve drinks which are fashioned following a 1:3 alcohol to mixer ratio. These drinks often involve some sort of carbonated mixer. The glass itself stands tall at 16.8cm and can hold up to 10.5oz of liquid.

Cylindrical yet thin, this glass is meant to preserve the carbonation from any soda. Less room in the glass means there’s less chance for any fizz to escape. Being tall, the glass can also hold a lot of ice to keep the drink cold.

The coupe glass is like a smaller version of a martini glass, except it has a different-sized bowl. A popular tale is that the bowl was designed to resemble Marie Antoinette’s breasts, but this is not true!

This glass was actually designed by a Benedictine monk in 17th century England. Instead of an inverted cone bowl, the coupe has a rounded but shallow bowl. Its stem is also shorter and thicker than that of the martini glass.

At its inception, the coupe’s purpose was to serve champagne. However, as we now know, a wide bowl wouldn’t preserve any of the champagne’s flavours or fizz. The glass made its way to the United States after the Prohibition, and it became popular there for serving spirit-heavy cocktails.

You can use a coupe glass to serve drinks that you would normally serve in a martini glass. However, it’s also a great vessel for drinks that are meant to be consumed cold and straight.

Also called a rocks glass or a lowball glass, the old fashioned glass is short and stout. It’s cylindrical, but is wider than the highball glass. It’s only 8.9cm tall and holds 10.25oz of liquid.

Similar to the highball glass, the old fashioned glass is meant to serve drinks with a 1:3 ratio. It’s thick base allows mixologists and bartenders to muddle solid ingredients right in the glass.

Old fashioned glasses can be used to serve cocktails such as the old fashioned, white Russian, and negroni.

Perhaps the most uniquely shaped glass is the Glencairn glass. Specifically meant to hold whisky, this glass has a bowl which starts off narrow at the top, widens towards the bottom, and then tapers down towards a thick base.

This design is meant to trap the aromas of the whisky in the bowl until the drinker is ready to taste. As the glass is tipped toward the mouth, your nose is hit with the complex scents, allowing you to taste the drink before it hits your lips.

The best Glencairn glass is made of crystal. It’s 11.4cm tall, and can hold 6.5oz of whisky.

This glass looks very similar to a miniature wine glass, but is actually a perfect cocktail glass. It’s also known as a princess glass, although the name Nick and Nora was taken from a 1934 film called The Thin Man.

The stem on the Nick and Nora is sufficiently long, so that the cocktail stays farthest away from the surface of the table. This means it can preserve its coolness for longer.

Working together with a cold cocktail, the shape of the bowl actually helps to dilute the flavours of the alcohol inside, giving you a lighter taste. This is perfect for those who aren’t fans of strong drinks!

In addition to improving the qualities of the cocktail ingredients, glassware also affects how much you actually drink!

A study at the University of Bristol found that drinking from a straight glass, like a highball glass or a rocks glass, slows down the speed at which you drink by 60%. This is because a straight glass allows you to accurately track how much you’ve drank.

On the other hand, a curved glass can muddle your judgment because it’s more difficult to guess just how much you’ve had. This can cause you to drink a lot faster.