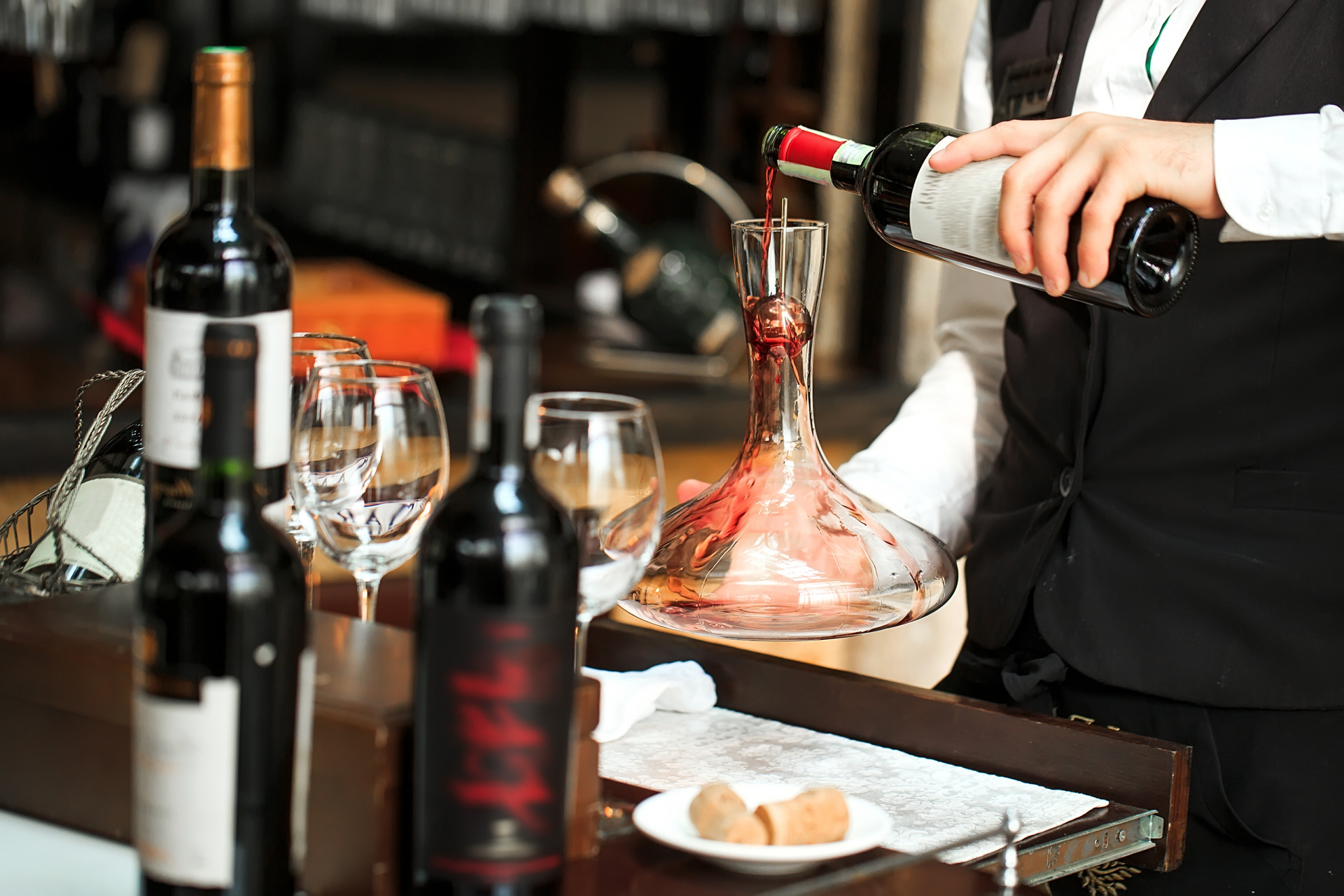 If you’ve ever ordered wine at a nice restaurant, you’ve probably seen the waiter pour the wine from the bottle into a unique looking contraption. That sleek glass vessel is called a decanter, and it’s been around for hundreds of years. Decanters come in many shapes and sizes and are usually made of crystal or glass. Have you ever wondered why wines often go in decanters before going into your glass? When did people begin to use this contraption, and how did it come about? More importantly, are decanters really only used for wine? Let’s take a deeper look at the history and purpose of this distinctive glassware.

What is a decanter?

Simply put, a decanter is a container that is used to serve wine. It’s most commonly made of glass. Wine is normally decanted, or poured into a decanter, before being served into individual wine glasses. This is done to aerate the wine, or as wine connoisseurs would say, “let the wine breathe.”

How did the decanter come about?

The wine world has an Englishman to thank for the invention of this vessel.

Hundreds of years ago, different parts of civilisation have had their own ways of storing wine. The most common containers were pottery jugs made of clay, which were used in ancient Greek and Roman times.

Over the years, as technology began to improve, the Romans developed the skill of glass-blowing. But even then, decanters didn’t exist until around 300 years ago!

As wine began to grow in popularity, it found a good market in England. As a result, there was an increase in demand for proper glassware to consume it in. The 1670’s saw a rise in the use of crystalline glass material, now widely referred to as lead crystal, around England. This was thanks to George Ravenscroft, who had brought Venetian lace and glass to London.

Ravenscroft continued to develop glassware of different styles, referencing what he saw in Venice. It wasn’t until the 1700’s that the first decanter was produced, stemming from an issue with the wines being shipped.

At the time, wine that had traveled would contain residue. This couldn’t be detected simply by looking into the dark bottles. They would only be visible when the wines are poured into glasses, and they created a bitter taste for consumers.

The decanter was initially created as a vessel to separate the liquid from the sediment. It was invented so that when wine is poured into the decanter, the sediments are left in the bottle.

With the development of technology and quality control in this day and age, the issue of residue is not as common anymore. However, this doesn’t mean that decanters are made obsolete. They are still widely used today, albeit for a different purpose.

A purpose to the shape

Decanters vary in shape and style. Some are similar to crystal carafes, and some are adorned and embellished to give a sense of class. However, the most common type of decanter is one that looks similar to a beaker or a the stereotypical fictional potion bottle. It has a wide bowl and a narrow neck.

These vessels can be further classified based on the shape of the neck:

Today, decanters are used to let the wine sit while it is exposed to oxygen. This is necessary because many wines are high in tannins which can create a bitter taste on the tongue. Tannins dissipate when they come in contact with oxygen.

The narrow neck of the decanter keeps all the wine’s aromas in the bowl, allowing very little to escape into the air. In this way, the wine will retain its scents when poured into a glass, and the consumer will be able to appreciate all its complexities when drinking.

In order to enjoy the most of your wine, follow these tried and true steps to use a decanter properly. The key to this process is patience.Before serving your wine, it’s best to let your bottle sit upright the day before. This ensures that any sediments in the wine gathers at the bottom of the bottle.

When ready to serve, open the bottle and tilt the bottle’s neck towards the decanter’s neck. Avoid tilting the bottle at too much of an angle. This ensures residues in the wine stay as far away from the opening as possible.

Make sure you’re pouring slowly with a steady hand. If residues float too close to the mouth of the bottle, sit the bottle upright again and wait until the sediments settle. Pour again, leaving a little bit of liquid in the bottle with the residues.

How long should I leave wine in the decanter?

The period of time you decant depends on the kind of wine you’re serving. Wines that are higher in tannins need to be in there a little longer. Naturally, red wines are

As a general rule of thumb, you can follow this guide:

Wines such as Zinfandel and Pinot Noir only needs around 20-30 minutes of decanting.

Merlot and Malbec are perfect examples of medium-bodied red wines. These should be decanted for up to an hour.

The heavier the wine, the longer it will need decanting. Spend one to two hours decanting reds such as the Syrah and Cabernet Sauvignon.

Can I decant other alcoholic drinks?

Wine isn’t the only thing you can decant. It’s also common practice to distill spirits. Unlike wine, which can go bad when left to oxidise for too long, spirits can be left to decant for up to two years. This is because elements in spirits are not as reactive to oxygen.

Here are some liquors you can decant: