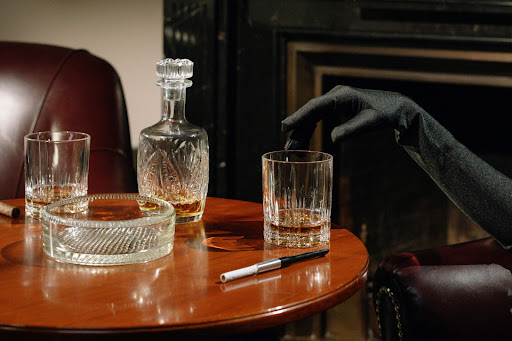 Brandy is known for its sweet, fruity, and oaky flavour. Some people prefer to drink it straight on rocks or even mix it into cocktails. If you are searching for brandy, chances are you will find the term ‘cognac’ in every brandy discussion. But are they the same?

Brandy & cognac both have a dark brown colour with an elegant outlook. It’s easy to mistake them as the same. Be sure to read the article below to know more about the differences between brandy & cognac!

Before knowing the differences between brandy & cognac, you should understand what brandy is first. Brandy is a liquor or distilled alcoholic beverage made from fermented fruit juice. Typically, the spirit is produced from grapes, but it can also use peach, cherry, apple, and apricot to make this alcoholic drink. The grapes that brandy is made from have less sugar and more acidity than the grapes used to make wine.

The name ‘brandy’ comes from the Dutch word ‘brandewijn’ or “burned wine” in English. Since brandy is originally made from grapes, it’s understandable why it is called ‘burned wine’. During the distillation process, the fermented grapes are heated to the boiling point. Thus the term ‘brandewijn’ is born.

Originally, brandy was created by the 16th-century Dutch merchants to preserve the wines during travel. Afterwards, the practice of making brandy became worldwide, and many countries began to make their own ‘distilled wine’, such as France and Spain. Traditionally, brandy was consumed after dinner to help the digestive system.

You can taste a fruity and oaky flavour with a hint of sweetness from the spirit. Generally, the older the brandy, the more mellow and oaky the taste is. The average ABV percentage of brandy is 40 percent.

The Process of Making Brandy

Just like any other liquor, the process of making brandy starts with fermenting the main ingredients. The grapes will undergo fermentation for at least two to three weeks before being distilled.

The distillation process is different from one brandy to another, but naturally, the fermented mash will be heated to the boiling point to separate the alcohol and water content. Later on, the blend will be aged in oak casks for at least two years. After the aging process, the alcoholic drink is sometimes mixed with other brandy and water before being poured and sealed in bottles.

Brandy & Cognac: Are They the Same?

The question about brandy & cognac has the same answer: is bourbon similar to whiskey, or is champagne the same as sparkling wine. Brandy is associated with cognac, since cognac is a type of brandy. In other words, cognac is brandy, but not all brandy is cognac.

Cognac is a brandy produced in Cognac, France, and it can only be made there. The alcoholic beverage is made from folle blanche, ugni blanc, and/or colombard grapes, contributing to cognac’s acidic taste.

The first distinct feature between brandy & cognac is the main ingredient. You can make brandy from any fermented fruit juice and not just grapes. But, to make cognac, you can only use white grapes, like Ugni Blanc or Grande Champagne grapes. Moreover, cognac has to be produced in the Cognac region, while brandy can be made from any region or country.

The second difference is the making process. There are many methods to make brandy, but cognac can only be produced in one way. Cognac has to be distilled twice. Typically, the distillation process starts from October 1st to March 31st.

The alcoholic drink is then blended and aged in French oak barrels for at least two years after being distilled. Based on the aging duration, cognac can be classified as Very Special (V.S.) Very Superior Old Pale (V.S.O.P.) and Extra Old (X.O.).

In conclusion, cognac is a brandy type with a specific ingredient, producing region, and making process.

Besides cognac, there are many types of brandy that you can try. Some of them are produced outside of French with unique flavours and methods, such as:

More flexible than French brandy, American brandy only requires a brandy aged for at least two years. But there is no specific rule regarding the main ingredient and technique in making the spirit.

Armagnac is produced in Gascony, France. It is made from certain grapes and aged in specific barrels, like Limousin and Troncais oak casks, for at least one year. Unlike cognac, this style of brandy only needed to be distilled once. Armagnac has a strong and rich flavour with less alcohol.

Unlike cognac and armagnac, the French style brandy isn’t aged in casks and can be made from other fruits, like peach, cherry, pomace, yellow plum, and pear. Unlike other brandies, it has a clear colour.

Grappa or ‘grape stalk’ is produced in Italy using fermented grape skins, seeds, and stems. Similar to eau-de-vie, grappa is usually not aged and colourless. But, sometimes grappa is aged and results in yellow or reddish colour.

Pisco is produced in Chile and Peru. Just like eau-de-vie, pisco doesn’t need to be aged. Typically, pisco is made using pisco acholado, pisco puro, pisco mosto verde, and pisco aromatico grapes. The ABV percentage of pisco can range from 30 to 50 percent.

Spanish brandy is produced in Andalusian, Spain, and is known as brandy de Jerez. At first, it was used as medicine before being consumed as a regular alcoholic beverage. Spanish brandy is made using the solera system, where the young blend is poured into older barrels during the aging process. Brandy de Jerez has a sweeter taste than other types of brandy.

Enjoy a Glass of Brandy or Cognac

Brandy & cognac can be consumed as it is or combined into cocktails. It all depends on your preference. If you are having difficulties choosing brandy & cognac, you can always drop by the Red & White store and ask the shop assistant for recommendations!